Algorithmic Therapeutic Oncology on organized by the Department of Molecular Biology and Genetics, Faculty of Arts and Sciences was held on December 17, 2018.

The event was organized to share current information on Molecular Biology and Genetics. The guest speaker of the event was Murat Can Çobanoğlu, Ph.D.

Murat Can Çobanoğlu studied Computer Science & Engineering (major) and Mathematics (minor) in Sabancı University from 2004 to 2008. He then obtained a master’s degree in Computer Science and Engineering also in Sabancı University, between 2008 and 2010, where he worked on the classification of GPCRs using family specific motifs. He received his Ph.D. degree from the Carnegie Mellon University – University of Pittsburgh Joint Ph.D. Program in Computational Biology under the supervision of Ivet Bahar, Ph.D. and D. Lans Taylor, Ph.D. where he worked on computational drug-target interaction prediction and applications in alpha1-antitrypsin deficiency and Huntington’s disease. He then joined the UT Southwestern Medical Center Lyda Hill Department of Bioinformatics as the inaugural UT Southwestern Distinguished Fellow. Outside of work, he is proud to be an épéeist as well as a member of and a frequent visitor to the Dallas Museum of Art.” 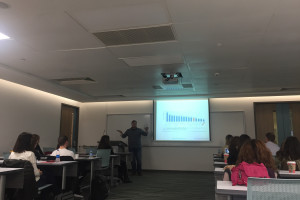