Assoc. Prof. Dr. Günseli Bayram Akçapınar, who is one of our faculty members, has been the first researcher from Turkey in the Project within Joint Genome Institute affiliated to the United States Department of Energy

The "Trichoderma Whole Genus Project ” titled project has been supported by JGI's "Community Science Projects" for nearly two years. The pilot phase of the project was also completed this year. Within the scope of the project cooperation, there are researchers from countries such as USA, China, Austria, Netherlands, Canada and France who have been carrying out important studies in this field for many years.

The Trichoderma which is subject to the research is a genus of mold fungus. This genus of fungi is known for its enzymes to break down cellulose, which is the largest part of biomass, its contribution to plant growth, and proteins that protect against plant pathogens as biocontrol organisms. These fungi are very important due to their potential to be used in the production of industrial enzymes, bioenergy production, and biocontrol against plant pests. It is aimed to reveal all the genome sequences of 400 different Trichoderma species within the scope of the Project over 5 years.. The knowledge and understanding to be gained with this Project will provide conveninence oftaxon evolution, ecology, diversity, and development of applications of its species in many areas, from plant protection to plant growth and bioenergy production.

Günseli Bayram Akçapınar was invited to collaborate in the "Small Secreted Cysteine-rich Proteins (SSCP)" module of the project, based on her previous work in this field. In this module, In this Project, it is aimed to research the structure-task relations, their functions in different areas from plant protection to plant growth and bioenergy production by revealing the different species of a wide protein family, which are involved in the immunity, defense, attack systems and ecological niche relations of fungi and increase the resistance of mold spores.

The Joint Genome Institute (JGI) is a research institute established in 1997 to combine expertise and resources in genome mapping, DNA sequencing, technology development, and information science under the US Department of Energy. The mission of the institute is to develop genome studies in a way that supports its goals such as the creation of clean energy resources, environmental characterization and prevention of environmental pollution. In this context, the Institute provides infrastructure and support to researchers working both inside and outside the USA in subjects such as high-performance genome sequencing, DNA design and synthesis, metabolomix and computational analysis.

We congratulate our faculty member and wish her continued success. 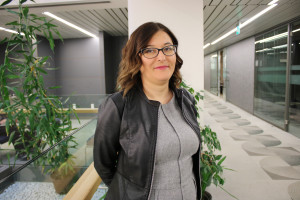